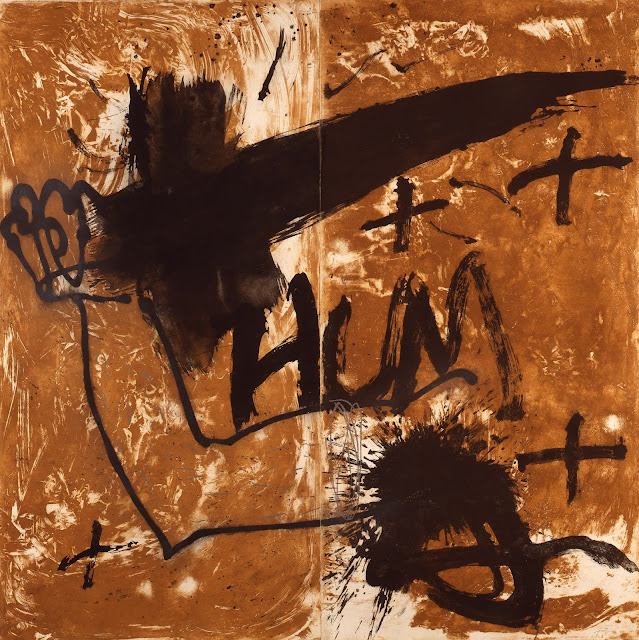 This exhibition, at Fundació Antoni Tàpies art museum, Barcelona (Catalonia), on levels 1 and 2, features a selection of prints and artist’s books made between 1988 and 1990 that explore Antoni Tàpies’ experimentation in the field of graphic art. 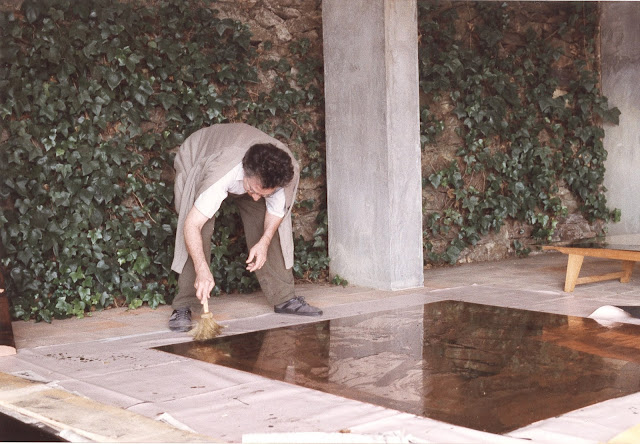 The exhibition has a dual purpose: on the one hand, to show how the artist subverted traditional techniques to obtain surfaces that were rich in texture and close to his style of painting; and, on the other, to demonstrate his desire to take advantage of a media that has a wider social diffusion to communicate ideas and thoughts, so as to influence the viewer.


Since the material aspects of the artwork were of prime importance, Tàpies was constantly
experimenting with new elements and techniques. Of all the techniques with which he experimented, this exhibition focuses on chalcography, that is, the process of biting an image into a metal plate through the action of acid. Tàpies treated the copper plate in the same way he would a sheet of cardboard or paper, using both his fingers and brushes. It was just another way of attacking the surface by which, as Tàpies said, submerging the copper plate in acid replaced the knife. 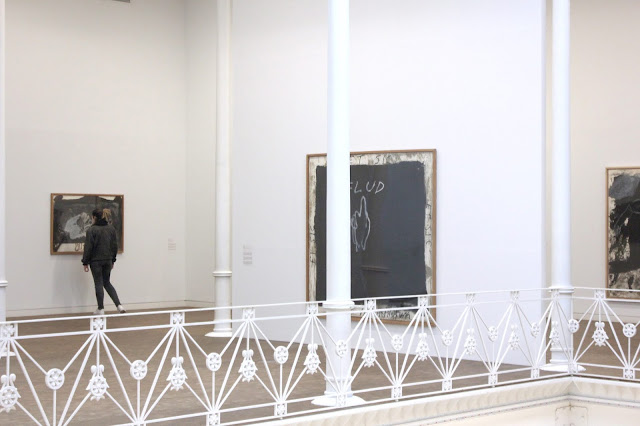 Both etchings and aquatints, as well as the engravings for artist’s books, feature a series of images –
such as the cross, body parts, figures and letters, everyday objects – that evoke many of the themes with which he was most concerned: consciousness of existence, human behaviour, the relationship with the universe, sex and death. From the beginning of his career as an artist, in the early 1950s, Tàpies, who experienced the struggle between avant-garde and militant art, chose to make avant-garde art that was at the same time at the service of society. 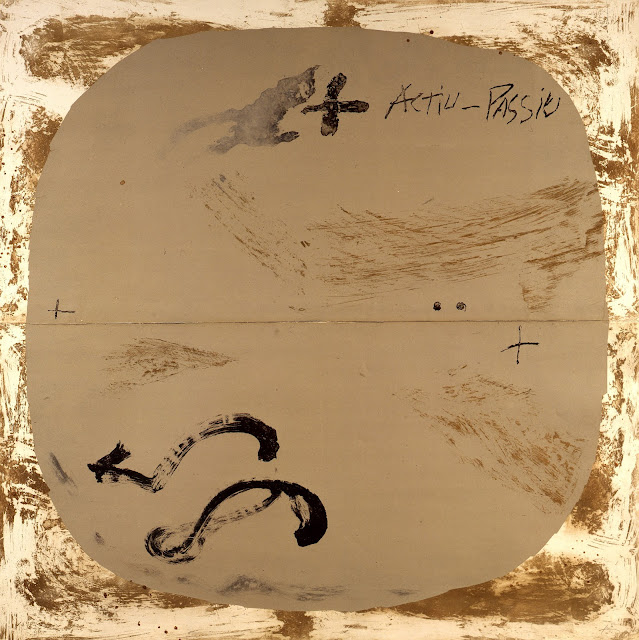 In this sense, Tàpies understood art not as a balm but as a means to provoke thought, as a knife to pierce the consciousness of the viewer. The possibility of reproducing his work as a multiple, and therefore reaching a larger number of people, reinforced the social aspect of his art.

Antoni Tàpies’ first artistic attempts began during a long convalescence following a serious illness, after which his increasing dedication to painting and drawing led him to abandon his university education. By the 1940s, he was already exhibiting work that distinguished him among the artistic scene of the moment. Co-founder of the magazine Dau al Set in 1948, and influenced by Miró and Klee, he became increasingly interested in iconographic and magical subjects. He gradually began to incorporate geometrical elements and colour studies leading to an interest in matter through the use of heavily textured canvases of great expressive and communicative possibilities.

With these works, Tàpies achieved international recognition by the mid-1950s. In the 1960s, he began incorporating new iconographic elements (writing, signs, anthropomorphic elements, footprints and references to the Catalan situation), and new technical methods (new surfaces, use of everyday objects and varnish). Tàpies’ pictorial language has continued to develop ever since, resulting in a creative and productive body of work that is admired throughout the world.

He has exhibited at the Museum of Modern Art and the Solomon R. Guggenheim Museum, New York; the Museum of Contemporary Art, Los Angeles; the Institute of Contemporary Art and the Serpentine and Hayward Galleries, London; the Neue Nationalgalerie, Berlin; the Kunstahaus, Zurich: the Musée d’Art moderne de la Ville de Paris, the Jeu de Paume and the Centre Pompidou, Paris; the Museo Nacional Centro de Arte Reina Sofía, Madrid; the Institut Valencià d’Art Modern, Valencia; and the Museu d’Art Contemporani de Barcelona, among many other prestigious institutions.

Antoni Tàpies created the Fundació Antoni Tàpies in 1984 with the aim of promoting the study and knowledge of contemporary art, paying special attention to art’s role in forming the conscience of modern man.